Why you should use OneDrive for work

Designed for business—access, share, and collaborate on all your files from anywhere.

Why you should use OneDrive for work

What if I told you there was a service that would offer greater efficiency, file security, and peace of mind if embraced by your organization? Sounds pretty good, right? It’s possible you already have it. That service is OneDrive for work.

Let’s take a look at some of the main features of OneDrive for work.

Do you know where your documents live? How about those of the rest of your organization? Did you know that one of the most popular locations where people save files is on their Desktop folder? Yikes! It isn’t good for organizational purposes, and it’s a folder that’s often overlooked for file backup. (More on that below!)

Are you backing up your computer daily? With OneDrive for work, automatic backups are run on your most important folders on your PC, such as Desktop, Documents, and Pictures all the time! 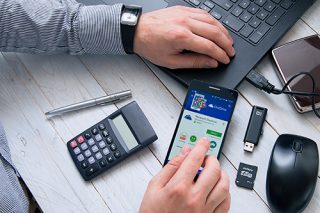 Here’s someone about to use OneDrive for work… Wait, can we talk about that calculator first? Based on its position, I think he’s using it more often than his smartphone AND his PC. I digress. I’d like to think he’s about to backup the contents of all of those portable digital storage devices to OneDrive for work. This image really tells a story!

Interoffice file sharing is often a mixed bag. Sometimes people properly share files on a central file server, while most resort to attaching files to emails. This practice is eventually taxing on the email folders, and it also creates multiple copies of a file that might eventually need to be updated. Now there are two or more versions of a file floating around on the network with the same name, but only one is current. That becomes confusing and makes locating the correct file in the future very difficult for others.

OneDrive for work allows you to right-click on the file or folder and choose a sharing option from a context-sensitive menu. Restrictions such as Editing and Read-Only are easy to apply, plus it has a great feature to remove access from the file immediately or at a future date.

Without OneDrive for work and Office 365, how can you tell which files have been shared with you that require your attention? I honestly do not know. Thanks to OneDrive for work, I don’t ponder this question anymore!

What is arguably the most significant feature of OneDrive for work is the ability is to collaborate with other co-workers on a single document. There is nothing more inefficient than needing to collaborate on a file than by having two or more parties working in the dark without one another. Ever try re-assembling a spreadsheet from a few different files? TEDIOUS. With real-time collaboration, you can see the participant(s) working right alongside you. See what others added, edited, or removed. Plus, the document saves automatically and creates restore points. (More on that below!)

All the files stored in OneDrive for work have automatically saved states (restore points) in case you need to roll back to a version of the document as it was from, say, the day or week before. While this is a feature available without OneDrive for work, it usually needs direct assistance from your IT staff, and that’s if it was configured beforehand!

It’s hard to embrace something when it’s not convenient. Thanks to the very nature of Office 365, accessing your files on OneDrive for work is a snap. Open your files from a Windows PC, Mac, or smartphone from anywhere you have an internet connection. It’s simple and secure.

So what are you waiting for? Contact us today to start reaping the benefits of OneDrive for work!

A native of Erie Pennsylvania, Corbett joined the Velocity Network team in 1997. Since he arrived at the company, he has occupied several roles, including Service Technician, and Web Developer before being named Marketing Specialist. In his role as Marketing Specialist, Mike has established and maintained the VNET and VNET Fiber brands. Michael has four wonderful kids with a beautiful wife that is far better than he deserves.
Categories:Article