Decision 2020 is upon us. Two storied candidates with contrasting strategies that are as different as night and day. Still, both share the same goal of captivating people’s imaginations and connecting Americans in living rooms across the country. No, I’m not talking about the 2020 presidential election; I’m talking about the next-generation game consoles war that is just kicking off later this month.

Let’s start by taking a look at the candidate from Redmond Washington, the Xbox Series X and the digital only version, the Xbox Series S. These new models represent the fourth console release since Microsoft threw its hat into the gaming arena back in 2001.

Unlike the launch of the Xbox One, the Series X has been designed to serve first and foremost as dedicated, powerful gaming console and not a multi media designed to dominate the living room. The specifications place it in line with $900-$1000 gaming PC making it a great deal for those who are looking to play the latest games at maximum settings on a crispy 4K display.

The difference between the Xbox models:

Series X
This is the flagship model from Microsoft. If you’ve got a 4K TV to play it on, the Xbox Series X is the right choice for you.

Series S
Don’t underestimate this tiny marvel. If you have a 1080p TV and don’t plan on upgrading for a while, this might be the way to go to save some cash.
Optical Drive: None
Memory: 10GB RAM
Storage: 512GB flash storage
Output HDMI: 1440p at 60 FPS, up to 120 FPS

The difference between the two models

With the Series S model, Microsoft is positioning their next-generation model for the masses who do not have the latest 4K TVs. For the most part, owners of the S model experience the same benefits of the X but with half the build-in storage and owners will be restricted to play only digitally purchased games. It’s essential to be aware that the S model will not be able to play physical games, which will have an effect on purchasing used games in the future or playing a back catalog of older games.

Both models feature exceptional backwards compatibility with ALL Xbox consoles going back to the original. However, the Xbox Series S is not backwards compatible with Xbox One X versions of games games such as Forza that utilized higher resolution textures. This is not duo to the power of the Xbox Series S, but instead is due to the lesser amount of RAM in the Series S compared to the Xbox One X. Confused? It’s not a huge deal especially since you will not be playing on a 4K display.

For those with limited internet, you’ll probably want to stay away from the Xbox Series S since you’ll need to download all your games and will likely want to swap games out which will require frequent access to broadband.

As mentioned above, backward compatibility going back to the first generation Xbox. Microsoft has also done a great job of building up the Microsoft Game Pass subscription which instantly gives you access to over 100 curated games, including all the Microsoft first-party hits such as the Halo and Gears of War series. Microsoft also touts a new feature called Quick Resume that allows you to leave a game you’re playing, launch another app or game, then switch back to your previous game at the same point you left it in mere seconds.

Why you should care

Sony soundly beat Microsoft in the last generation, which caused the Xbox team to pivot their position in the market. Where multiplayer barriers between platforms have been a way of life for decades, Microsoft opened up their platform first to the PC with its operating system, Windows, followed by the Nintendo Switch, iOS, and Android. This began with Minecraft (a Microsoft-owned property) but came later to games like Fortnite, Destiny 2, and Apex Legends, to name just a few. This has been a significant change for the consumer as your platform of choice doesn’t necessarily have to lineup with that of your friends or family. In my family, we play Fornite together with two kids on Nintendo, one on Xbox, and myself on a Playstation.

Shopping Tip: The previous third-generation Xbox was called the Xbox One X, and while it was a powerful machine, it is not even close to the new Xbox Series X. Look for deep discounts on the old model this holiday season, but keep in mind, there will be no such deal this Christmas for the latest. Some dishonest Amazon sellers have reportedly sold thousands of Xbox One X units to buyers who thought they were purchasing the new Xbox Series X.

Another option for acquiring an Xbox Series X or S is through the Xbox All Access program. Check out the details here: https://www.xbox.com/en-US/xbox-all-access 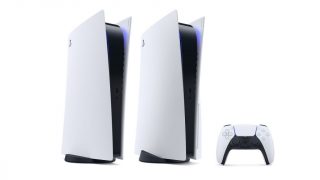 The Playstation 4 was the clear winner in this past generation, but it doesn’t mean a hill of beans as they make the transition to the next console cycle. That said, Sony employed the same system architect they used for the PS4 for the design of the PS5 and early indications are, they’ve built powerful machine that is easy to develop for.

The Playstation 5 and the Xbox Series X share many of the same specifications on paper, but unlike PCs that use off the shelf parts are inherently made for multiple functions, game consoles use specially customized chips along with different designs that are made to offer game designers the most hardware resources possible.

The Playstation also comes in two flavors, but unlike Microsoft, Sony chose to keep their models the same except for the exclusion of the optical drive in the Digital Edition. By removing the blu-ray allows Sony to have a console available for the same price point that worked so well for the Playstation 4.

What makes these new consoles better?

As with other categories of technology, you will see a huge leap in performance with these new consoles. This translates to smoother gameplay (a new standard of 60 frames per second vs. 30 frames per second on many of today’s consoles) Better looking graphics, particularly in how light is rendered in these virtual worlds. Other features are massive improvements to loading times (the time it takes for a game to launch and become playable), quick resume functionality that allows the gamer to leave a game, switch to another game or app, then hopping back to the previous again almost instantly. For those with high-end TVs, these consoles will maximize the extra pixels on the TV, which provide a sharper image and take advantage of high-end color display and frame rates that reach as high as 120fps.

Sony’s new controller features advanced rumble technology that will offer a new level of feedback to the player’s hands.

Which should you buy?

The best advice I can give is to look at the games. Today, many of the most popular games can be played on either platform. This actually can make the decision much easier especially if you’re looking to play with friends. But if you have your heart set on a specific title, look to see if it’s a a true console exclusive. For instance Gran Torismo will only be available on the Playstation whereas Forza is available only on the Xbox (and Windows.) If you have a back catalog of games on a particular platform, you might want to make that your console of choice. This past generation lowered their respective wall that separated their players from those on competing platform holders (Nintendo, Microsoft, and Sony.) This has been a big win for gamers as it has allowed gamers to participate in some of the most popular multiplayer game titles in the Call of Duty Series, Fortnite, Minecraft, and more.

If you were not able to get a pre-order on either console, it’s going to be difficult to get one at retail but you may want to contact Best Buy, GameStop, Wal-Mart, or Target to get information on inventory and orders. No matter which candidate you pick, all gamers look to be winners this generation.

A native of Erie Pennsylvania, Corbett joined the Velocity Network team in 1997. Since he arrived at the company, he has occupied several roles, including Service Technician, and Web Developer before being named Marketing Specialist. In his role as Marketing Specialist, Mike has established and maintained the VNET and VNET Fiber brands. Michael has four wonderful kids with a beautiful wife that is far better than he deserves.
Categories:Healthy Connections

Take a Holiday from Social Media